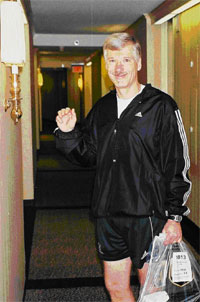 Many participants in the annual New York marathon Nov. 2 will be out to prove something to themselves, but for Tom Jones, this is the least of his reasons for running.

Mr. Jones, the father of 28-year-old Anita Jones, who was born with a learning disability, is running to help raise money for United Cerebral Palsy of Georgia.

“UCP has been very helpful in managing my daughter’s day-to-day life,” the Columbia County resident said.

Mr. Jones knows how crucial and beneficial UCP’s services are for a family. His daughter lives at Foxhall, a group home on Pleasant Home Road. She recently began attending the organization’s new day program, a program that helps adults with developmental disabilities learn to live independently.

“It’s hard to put a value on UCP giving a life to Anita and the others there,” Mr. Jones said. “They provide care, they take them to movies and shopping – UCP really gives them a life.”

Mr. Jones said two other factors were key in his decision to take part in the marathon, something he said he hasn’t done since he was in his 20s.

The 51-year-old said he wants to show seniors they can be participants rather than spectators. He said he also runs to stay in shape so he will be around for his six daughters, who range in age from 2 to 28.

“When I reached 50, I wanted to stay in shape to see all my daughters grow up, and hopefully walk them down the aisle,” he said.

To get in shape for the New York event, Mr. Jones said he started out walking, then running, then he began his marathon training. For several months, when he wasn’t at his job at Carole Fabrics, where he is the vice president of finance, he was running – averaging 50 miles a week. Mr. Jones said he has trained hard the past 10 weeks, running 60-80 miles each week to be sure he’s ready for the 26.2 mile event.

Although physically it has been challenging, he said he has no plans on quitting.

“I’ll do whatever I can to support UCP because I’ve seen firsthand what they do,” Mr. Jones said. “It’s a real good organization and a worthy cause.”