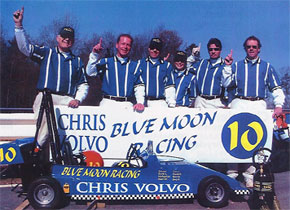 This coming March 8 and 9, Chris Volvo in Marietta joins more than twenty other teams in a quest to earn racing glory and benefit United Cerebral Palsy of Georgia (UCPGA). The Miller Lite Charity Grand Prix Race at Road Atlanta is being produced by UCPGA for the third straight year. This year marks the second time that Chris Volvo has been a race sponsor. Its sponsorship helps to support the charity’s program for more than 1000 Georgians of all ages, with developmental disabilities.

The weekend event simulates the excitement of road car racing and allows amateur drivers to experience the thrill of challenge of performance racing. Each car is a 1/3 scale replica of those raced in the Indy 500. They feature a 6 HP Tecumseh 4 cycle engine with a recoil start. The chassis is composed of tubular steel with a one-piece fiberglass body, and a automatic centrifugal clutch with a chain drive sprocket.

The Chris Volvo team, Blue Moon, participated for the first time in 2002. Says team member and Chris Volvo Parts manager David Russell: “The race gave us a great sense of camaraderie. It also gave us the opportunity to help out a great cause.” How did Blue Moon fare? “One time the wheel went off when we pulled out of our pit stop,” David laughts. But that didn’t affect their ultimate triumph. “We pulled off a third place finish in the Indy Car Championship Race,” David states.

Chateau Elan Party for Participants Acknowledges Sponsors
This year as last, a weekend highlight for participants is the much anticipated Saturday night Race Party at Chateau Elan. At the evening’s dinner, deserving teams and sponsors are recognized for Best Looking Car, Best Team and other categories. In 2002, Chris Volvo was acknowledged for giving all participants custom designed race t-shirts that featured their company’s logo.

Chris Volvo Expands Participation through Opportunities from Vendors
Following last year’s event, the Blue Moon team’s enthusiasm for the race experience proved catching. A number of their co-workers wanted to participate in this year’s race. Additionally the original Blue Moon team members were aiming for a second crack at the excitement. They suggested that their company enter two cars for 2003. Chris Volvo wholeheartedly agreed with their effort to expand company participation and employee support for UCPGA.

Explains David, “Six other employees will comprise the Blue Moon team this year.” And in addition to substantial increase in his company’s donation to go toward the new racer, employees will raise additional donations. David Russell states, “The 2002 team plans to race $2,000 from Chris Volvo’s major suppliers. In return for their support, suppliers will be acknowledged on our race signs, at the Saturday night party and in UCPGA’s official publication.” Regarding sponsorship levels, he adds, “If one of our vendors or another supporter comes up with $1000 donation, we’d love to have that person be our entry in the VIP race.” All donations to United Cerebral Palsy of Georgia are tax deductible.

As of this writing, Chris Volvo was one of the few auto industry participants in this year’s event. David is enthusiastic, however, about the potential for expanded industry participation by others in the automotive field. The prospect of creating a friendly annual competition for colleagues in the industry is an idea that intrigues him. He adds, “We’d love to have industry race of just car dealers, or more than one a year.”

Public Invited to Road Atlanta Race
Parking and admission to Road Atlanta for the Miller Lite Charity Grand Prix Race is free and open to the public. Further information and the two-day schedule are accessed under “Events” at www.ucpga.org.